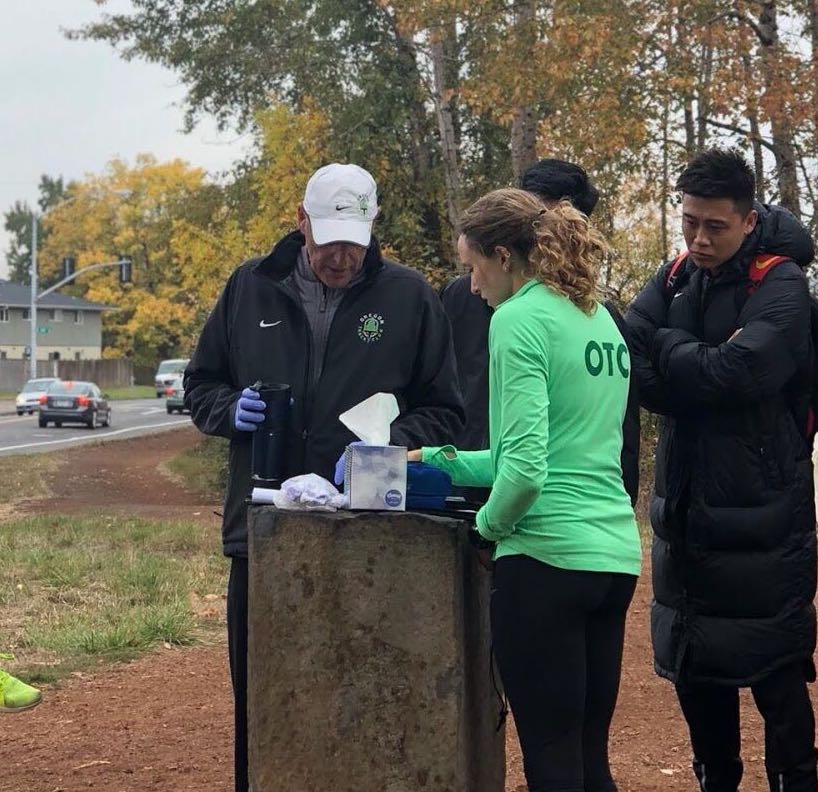 Whatever happens, happens ... just have fun!

Meet our FitrWoman Ambassador, Hanna Green. Now a professional runner with Nike Oregon Track Club Elite, Hanna (24) graduated from Virginia Tech in 2017 and has been taking the running world by storm!

We recently caught up with Hanna and asked her a few questions about her typical daily routine.

What does a typical day look like for you?

I'm up at 7.30 am and then I’ll eat breakfast. Most days I’ll usually have oatmeal with maybe some blueberries and then a yogurt and a banana, and if it’s a workout day then I’ll drink a cup of black tea too. And then usually we work out at 10 am so we’ll get there around 9.15, warm-up, do the workout. I’ll come home, shower, and have lunch and then I hang out during the day - I like to read, so I read a lot of books and watch some TV.

I’ll do a protein whey shake right after [the session] before I come home. On workout days I swim in the afternoon, so I’ll do around 20-30 minutes in the pool, swimming laps backwards and forth and then usually I’ll see my phyio, usually for a light flush, he’s been doing shockwave treatment on my achilles too.

When I get home, and by that time it’s usually 4.30 pm. I’ll make dinner and then after dinner there’s not a lot of time, I’ll either read or I’m working on a few drawings right now. I’m in usually in bed by like 9.30 pm but definitely asleep by 10 pm.

You live in a big house with some of the other guys on the team - Do you cook together?

I usually cook for myself. We usually just do our own thing, unless someone is doing something big and then we share it. Hassan [my teammate] did a lasagne last week and Tom made a tortilla soup. If I’m making something I’ll share that with them too.

I bake for them a lot! Usually I'll either bake or make a somewhat elaborate dinner. I recently got into making pasta [homemade]. I made some ricotta gnocchi and then some beetroot ravioli not too long ago.

When you’re in offseason - what do you do in your downtime?

I like to travel. When I’m not home I'm either visiting my family (in Pennsylvania) or traveling around and seeing new places. I went to New York last winter for a few days, this past summer I was down in South Carolina for a few days.

Where is your favourite city/place so far that you’ve been to..

I guess if I had to pick my favourite place in the US though it would be Washington DC. I just love being there and my sister goes to school there. I mean I love New York City too, but I definitely would not go back in the middle of December - it was so cold and miserable, I had like 5 layers and I was still freezing the whole time!

So if it’s right after the season I’ll take a week or two off but sometimes I’ll get a little bit restless and I’ll throw in an elliptical jog or I’ll walk my dog (Izzy). My poor dog, sometimes I end up walking her for 4 miles a day! When I get restless I’ll do something but otherwise, I'm doing very little and eating whatever I want!

I think outdoor USA’s was probably my highlight. Being able to make the finals for the first time and running a PR, I guess 2 PRs back-to-back, especially after coming off the injury and not even thinking I was going to be able to run USA’s. I think that was probably the best part of the season.

I mean understanding coach and his way, I think I’ve got that down now! I think it’s the injuries that come up every now and then, having to deal with that, not getting frustrated I'm only able to cross-train and I guess not being too depressed about it and working through it.

Do you get nervous before big races?

How do you prep?

I don’t have anything really specific, I listen to music on my way there. I generally try to down play everything I guess - whatever the meet, whatever happens happens, just have fun, things like that. I definitely still stress out about it beforehand, but usually I can calm down about it before the race.

Most looking forward to?

I’m definitely looking forward to improving my 800m but also working on improvement in the 1500m, moving up a little but, just kind of building up mileage and being able to be competitive in that event also

I don’t really mind either of them, I think it depends, if I’m in good shape to run the 1500m then I like it, but if I’m not then I hate it! Same with the 800m. It’s just which ever one I guess I’m in better shape for at the time!

What piece of advice to younger self?

I think, I would say not to worry about everything. Everything just kind of works out most of the time, there’s no reason to be anxious about it or stress out about it. Do whatever you can do and give it your all and it will all work out!

How has FitrWoman helped you?

Its been super useful being able to track my menstrual cycle and seeing what the differences are that occur, because I didn’t have a clue about any of that before, I was just like ‘I feel kind of shitty today’ but now I know why! I guess, it informs me as to how my body’s reacting that day (to whatever) and being able to track everything too is nice. I guess for me, it's mostly the information, things that I never would have thought about or researched on my own. It’s been super helpful!

My favourite thing to cook, is pizza! I love cooking pizza from scratch. My mum has always made pizza, we never really ordered pizza when I was younger, and I think everyone loves pizza. We have our own dough recipe, and we have our typical toppings and whatever seasonings we put on it, and then we change up the toppings depending on who wants what, because everyone always wants something different! One of my favortire things to bake is pie, especially pumpkin pie!

To find out more about Hanna follow her on…